When I started at Bitly as a Frontend Engineer, we were about to launch the new bitly. It was exciting to be so close to a product launch and we were cranking out lots of code each day. It took me a few days to get my bearings in the sprawling codebase and I saw […]

When I started at Bitly as a Frontend Engineer, we were about to launch the new bitly. It was exciting to be so close to a product launch and we were cranking out lots of code each day. It took me a few days to get my bearings in the sprawling codebase and I saw lots of opportunity for refactoring, cleanup, and style normalization as well as some architectural concepts we weren’t leveraging.

Product launch mode kept us from doing house keeping for the next few months after we released the new product as we collected feedback and iterated on several designs/functionalities.

Once we had a chance to take a step back and regroup, I saw that we could be more productive if we invested in a common JavaScript style (both syntax and module level patterns) and re-evaluated which libraries we were leveraging to build the site.

When we decided the next feature work would be on save/share modal dialogs, I used this as an opportunity to evaluate my new picks for tools and libraries. The result was a success and allowed us to adopt the new tools and libraries for all new features (see Easily Save and Share the Links You Love).

Keep reading to see what tools we ended up using to make us more productive!

If you’ve seen frontend JavaScript codebases older than six months with two or more developers working on them, you’ve seen how hard it is to enforce style.

The goal of a style guide (and code conventions in general) is to reduce the amount of friction when switching between different modules in a codebase and increase the consistency and readability of code. If every module follows the same patterns, you can easily get your bearings in code written by your coworkers. Every team should have a common style that is enforced in code review and ideally written in a document that can be referred to for new hires.

For JavaScript at Bitly, we mostly use the Google Style Guide without the JSDoc and with a variation that non-method variables are lowercase_with_underscores e.g.

The bigger the team, the more you might have to diverge from your preferred style but you’ll still get tons of benefit from the consistency alone.

At Bitly, in addition to codifying the style guide, we gave Coffeescript a trial run and decided to continue using it for all new code (like Github does). Coffeescript is quite contentious in the JS community, but for our frontend team we saw a great improvement in workflow and maintainability.
Since whitespace is significant and {} and ; are almost always omitted, there is a distinct Coffeescript style that is encouraged by default.

Here’s a snippet from a Backbone View that declares all the DOM event handlers for the view in a concise way.

Fat arrow (=>) is another great feature used for binding a function to the current scope and obviates the var self = this; pattern you will see in almost all JS codebases.

Here, fat arrow binds selectItem at constructor time to the newly constructed instance of MultiPickerView (not the prototype) instead of the default jQuery wrapped current target so I can access View methods/members within the handler.

Handlebars is a template language with partials, custom helpers, and minimal logic, which can be compiled on the client or server side. We take advantage of the watcher system we already had in place for compiling Coffeescript to automatically compile our Handlebars templates ahead of time in order to reduce the workload on clients.

One of the major benefits for using Coffeescript is the compile-time checking that catches syntax errors. Instead of using the built-in coffee -cw *.coffee to compile-on-change, I wrote a script that does this but also triggers Growl notifications if the compilation produced errors.

The script does the same for *.handlebars files (for which there is not a built-in watcher functionality). 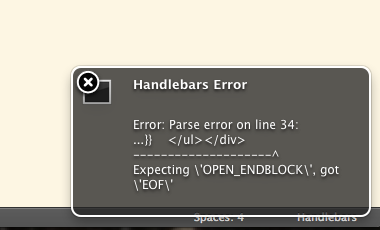 Historically, frontend JavaScript is fertile ground for spaghetti code, tight coupling, repeated code and scattered entry points. The introduction of jQuery increased this trend by making it easy for developers to handle DOM events and add visual effects wherever it was most convenient. This scales to a point, but when you start doing lots of AJAX, manipulating application state, and generating HTML using the DOM APIs, things can quickly get out of hand.

Backbone introduced a few great primitives that can be leveraged to make more maintainable frontend code.

Models are a good abstraction when you have a lot application state that can change based on user interaction and/or AJAX calls.

Events implements pub/sub pattern which allows you to easily decouple your models and views. This is probably the most important development for frontend application architecture. The order of events generally might go like this:

The decoupling is that the Model never has knowledge of the View. This means the Model handles only the business logic and can be much more easily tested.

There has been much written on Backbone and other MV* frameworks, so I won’t evangelize much here except to say that adding a View and Model layer in your frontend JavaScript will improve your architecture significantly.

Addy Osmani gives a good treatment as to why you would use MV* and how to select your tools in: Journey through the JavaScript MVC jungle

Unit testing is a given for any modern web app with a long lifecycle and high volume of traffic.

There are many test runner frameworks for testing but you should choose one that matches your style. I like Mocha because it can handle BDD, TDD, and export styles, has a nice web browser interface, is being adopted in lots of places, and is written by TJ Holowaychuk who has a great reputation in the node community. The two other big names in testing frameworks are Jasmine and QUnit, but they are more opinionated and less flexible.

Besides a test runner, you’ll want some helper libraries to make your tests easier to write.

Sinon is essential as it provides spy, stub, and mock functionality to make sure you are testing the unit under test and not its dependencies! The author wrote Test-Driven JavaScript Development and is the foremost expert on this topic.

To support different styles of test assertions, you may like Should.js which provides expressive methods so you can write tests like:

Here is a sample test file for our AJAX wrapper method (which uses mockjax):

Here is a sample of our test suite and its test runner: 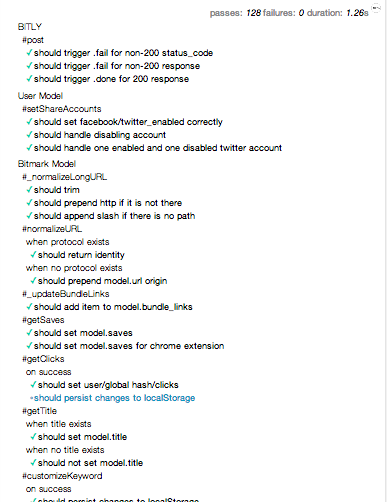 Always be looking to improve your toolkit and sweat the small stuff when it comes to code quality. Every engineer wants to work with other great engineers. Ask yourself “If not me, then who on my team will make the effort?”

If you like working with other great engineers, bitly is hiring.