spray some NSQ on it

We released NSQ on October 9th 2012. Supported by 3 talks and a blog post, it’s already the 4th most watched Go project on GitHub. There are client libraries in 7 languages and we continue to talk with folks experimenting with and transitioning to the platform. This post aims to kickstart the documentation available for […]

We released NSQ on October 9th 2012. Supported by 3
talks and a blog post, it’s already the 4th most
watched Go project on GitHub. There are client libraries in 7
languages and we continue to talk with folks experimenting with and
transitioning to the platform.

This post aims to kickstart the documentation available for “getting started”
and describe some NSQ patterns that solve a variety of common problems.

DISCLAIMER: this post makes some obvious technology suggestions to the
reader but it generally ignores the deeply personal details of choosing proper
tools, getting software installed on production machines, managing what
service is running where, service configuration, and managing running
processes (daemontools, supervisord, init.d, etc.).

Regardless of the type of web service you’re building, in most cases you’re
going to want to collect some form of metrics in order to understand your
infrastructure, your users, or your business.

For a web service, most often these metrics are produced by events that happen
via HTTP requests, like an API. The naive approach would be to structure
this synchronously, writing to your metrics system directly in the API request
handler. 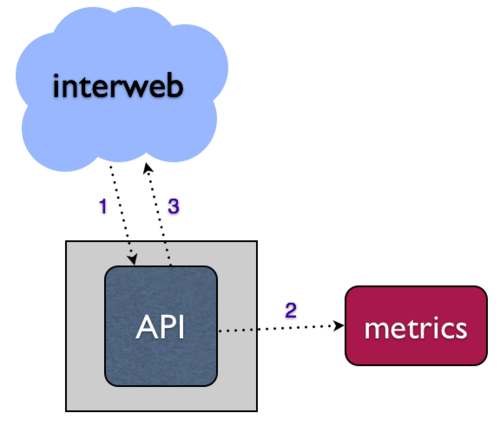 One way to resolve all of these issues is to somehow perform the work of
writing into your metrics system asynchronously – that is, place the data in
some sort of local queue and write into your downstream system via some other
process (consuming that queue). This separation of concerns allows the system
to be more robust and fault tolerant. At bitly, we use NSQ to achieve this.

Brief tangent: NSQ has the concept of topics and channels. Basically,
think of a topic as a unique stream of messages (like our stream of API
events above). Think of a channel as a copy of that stream of messages
for a given set of consumers. Topics and channels are both independent queues,
too. These properties enable NSQ to support both multicast (a topic copying
each message to N channels) and distributed (a channel equally dividing its
messages among N consumers) message delivery.

For a more thorough treatment of these concepts, read through the design
doc and slides from our Golang NYC talk,
specifically slides 19 through 33 describe topics and
channels in detail. 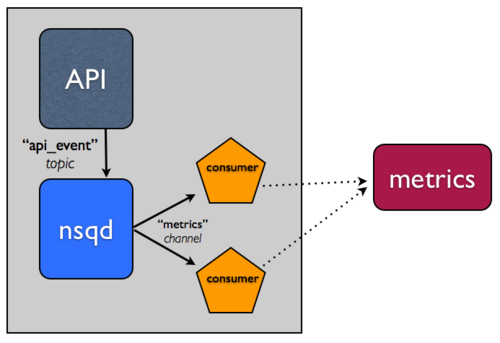 In addition to de-coupling, by using one of our official client libraries,
consumers will degrade gracefully when message processing fails. Our libraries
have two key features that help with this:

In concert, these two features allow the system to respond gracefully to
downstream failure, automagically.

Ok, great, now you have the ability to withstand a situation where your
metrics system is unavailable with no data loss and no degraded API service to
other endpoints. You also have the ability to scale the processing of this
stream horizontally by adding more worker instances to consume from the same
channel.

But, it’s kinda hard ahead of time to think of all the types of metrics you
might want to collect for a given API event.

Wouldn’t it be nice to have an archived log of this data stream for any future
operation to leverage? Logs tend to be relatively easy to redundantly backup,
making it a “plan z” of sorts in the event of catastrophic downstream data
loss. But, would you want this same consumer to also have the responsibility
of archiving the message data? Probably not, because of that whole “separation
of concerns” thing.

Archiving an NSQ topic is such a common pattern that we built a
utility, nsq_to_file, packaged with NSQ, that does
exactly what you need.

Remember, in NSQ, each channel of a topic is independent and receives a
copy of all the messages. You can use this to your advantage when archiving
the stream by doing so over a new channel, archive. Practically, this means
that if your metrics system is having issues and the metrics channel gets
backed up, it won’t effect the separate archive channel you’ll be using to
persist messages to disk.

So, add an instance of nsq_to_file to the same host and use a command line
like the following: 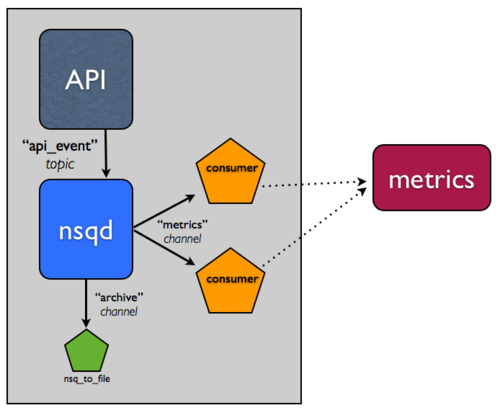 You’ll notice that the system has not yet evolved beyond a single production
host, which is a glaring single point of failure.

Let’s assume for a second that this event stream is really important. You
want to be able to tolerate host failures and continue to ensure that messages
are at least archived, so you add another host. 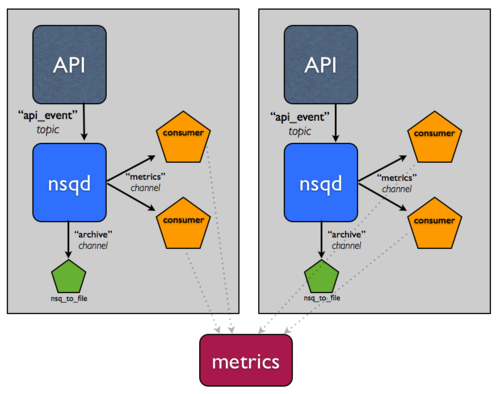 Assuming you have some sort of load balancer in front of these two hosts you
can now tolerate any single host failure.

Now, let’s say the process of persisting, compressing, and transferring these
logs is affecting performance. How about splitting that responsibility off to
a tier of hosts that have higher IO capacity? 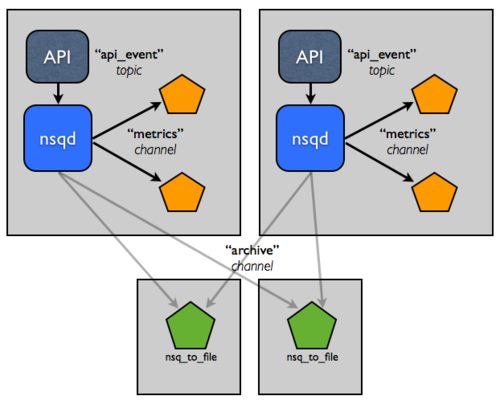 This topology and configuration can easily scale to double-digit hosts, but
you’re still managing configuration of these services manually, which does not
scale. Specifically, in each consumer, this setup is hard-coding the address
of where nsqd instances live, which is a pain. What you really want is for
the configuration to evolve and be accessed at runtime based on the state of
the NSQ cluster. This is exactly what we built nsqlookupd to
address.

nsqlookupd is a daemon that records and disseminates the state of an NSQ
cluster at runtime. nsqd instances maintain persistent TCP connections to
nsqlookupd and push state changes across the wire. Specifically, an nsqd
registers itself as a producer for a given topic as well as all channels it
knows about. This allows consumers to query an nsqlookupd to determine who
the producers are for a topic of interest, rather than hard-coding that
configuration. Over time, they will learn about the existence of new
producers and be able to route around failures.

The only changes you need to make are to point your existing nsqd and
consumer instances at nsqlookupd (everyone explicitly knows where
nsqlookupd instances are but consumers don’t explicitly know where
producers are, and vice versa). The topology now looks like this: 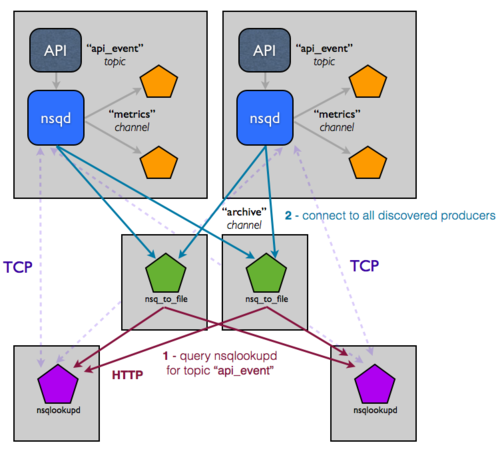 At first glance this may look more complicated. It’s deceptive though, as
the effect this has on a growing infrastructure is hard to communicate
visually. You’ve effectively decoupled producers from consumers because
nsqlookupd is now acting as a directory service in between. Adding
additional downstream services that depend on a given stream is trivial, just
specify the topic you’re interested in (producers will be discovered by
querying nsqlookupd).

But what about availability and consistency of the lookup data? We generally
recommend basing your decision on how many to run in congruence with your
desired availability requirements. nsqlookupd is not resource intensive and
can be easily homed with other services. Also, nsqlookupd instances do not
need to coordinate or otherwise be consistent with each other. Consumers will
generally only require one nsqlookupd to be available with the information
they need (and they will union the responses from all of the nsqlookupd
instances they know about). Operationally, this makes it easy to migrate to a
new set of nsqlookupd.

Using these same strategies, we’re now peaking at 65k messages per second
delivered through our production NSQ cluster. Although applicable to many
use cases, we’re only scratching the surface with the configurations described
above.

If you’re interested in hacking on NSQ, check out the GitHub repo and
the list of client libraries. We also publish binary
distributions for Linux and Darwin to make it easy to get started.

Stay tuned for more posts on leveraging NSQ to build distributed systems. If
you have any specific questions, feel free to ping me on twitter
@imsnakes.