For those starting with either Terraform or CloudFormation this guide is a good way to understand the differences between the two. I found myself a little bit stuck because I needed to find/create code (in this case) that would help me in Benchmarking our compliance status in AWS. I found a solution in CloudFormation, so […]

For those starting with either Terraform or CloudFormation this guide is a good way to understand the differences between the two.
I found myself a little bit stuck because I needed to find/create code (in this case) that would help me in Benchmarking our
compliance status in AWS. I found a solution in CloudFormation, so I wondered if there was some sort of translator tool (there wasn’t),
and if not, how and where would I start translating this code? Would it be worth me building it from scratch in Terraform?

First lets state the differences and how each syntax is built:

Terraform consists of modules, which is really up to the builder on what it does. Each module has blocks and along with the configuration,
it tells terraform how/when to use/build that module. Configuration files in Terraform are written in JSON.

CloudFormation is all about templates. If you want to build a configuration for an application or service in AWS, in CF,
you would create a template, these templates will quickly provision the services or applications (called stacks) needed.
The most important top-level properties of a CloudFormation template are:

Configuration files for CF are written either in YAML or JSON.

In this document, I’ll take you through the steps I went through on how to convert CF to TF. In particular, a recent project I worked on.
In case you haven’t heard about it, CIS is the Center for Internet Security, and they provide cyber security standards and best practices.
Recently, AWS launched a new service called AWS Security Hub, which analyses security findings from various supported AWS and third-party products. Security hub supports
the CIS AWS Foundations Benchmark, (read more here) which, quoting
CIS is “An objective, consensus-driven security guideline for the AWS Cloud Providers”. To jump straight into it, AWS Security
Architects partnered up with Accenture and created a CIS-Foundations Quickstart written in CloudFormation. So, after looking around, realised there wasn’t any versions written in Terraform, and also
no guides on how to translate it. Or automated translation tools for the matter (future work? hit me up for a collab) I decided to
do it manually, as I felt this was a bit of a sensitive project to be testing automated tools on. But fear not, I did not do it as manually as you think. Simplicity above everything!

Lets take a look at how the CloudFormation CIS Benchmark Quickstart works. 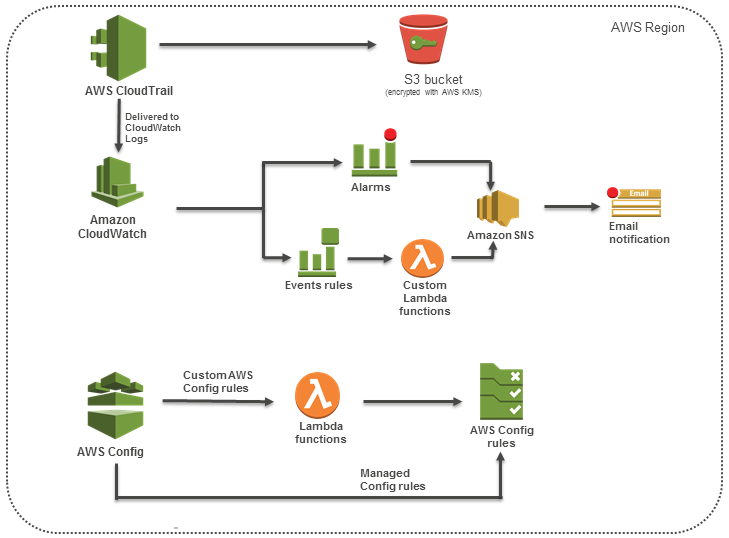 The stack can be described as follows:

Templates are the following:

Now that we stated how this CF project works, lets see how we can transform them into the likes of Terraform.

Lets see how a CF template would look like:

Now, lets see how we can use that to “translate” into Terraform.

Now, apart from tedious, translating line by line, especially in a big project, is a bit of science fiction (for me). So I dug around:

By Stating Resource: aws_cloudformation_stack_set, you can manage a CloudFormation stack set, so this functionality allows you to deploy
CloudFormation templates. It only accepts JSON templates.

Possible challenge: templates built in YAML instead of JSON

No problem! I had this myself, after a bit of googling, there is actually a tool called cfn-flip explicitly for the translation of YAML to JSON in CF:

So for example, if you want to create the template in json:

This is my case too, the cis-benchmark template is quite big. Luckily for us again, you can reference the json template, by uploading it to a S3
bucket. It would look like this:

Note: never reference config files and templates that have hardcoded variables (also never hard code sensitive data ) that are hosted publicly. In my case
think of that template as skeletal, it doesn’t have any sort of compromising info.

And done, we just created a part of the module in just 3 lines of code!

In our case, the Quickstart uses nested stacks. Now aws_cloudformation_stack terraform functionality doesn’t have a
“nested stacks” option. But creating the resources in the same module works fine.

Example code: (This is an extract of the module)

Now you can simply run and manage your stacks using Terraform. I suggest to
always be careful with sensitive data and parameters and follow best practices.
You can read more about it here

When it comes to features, CF and TF are not equivalent. It is not possible to express what CF is able to deploy in TF.
Which is why I aimed at this solution, translating line by line would be very tedious, so if that is your case i’d suggest
rewriting the entire module in TF. However writing a translator would be complex but very useful, still would have to figure
out how it would work when CF uses intrinsic functions (please contact me for ideas!) but i’d guess that’ll be for future work.
I hope this quick workaround helped you out!