JavaScript turns 25 years old today. While it’s made an impact on my career as a developer, it has also impacted many developers like me and users around the world. To commemorate our favorite language, we’ve collected 25 landmark events that have shaped the path of what the JavaScript ecosystem looks like today. 1995 1) […] 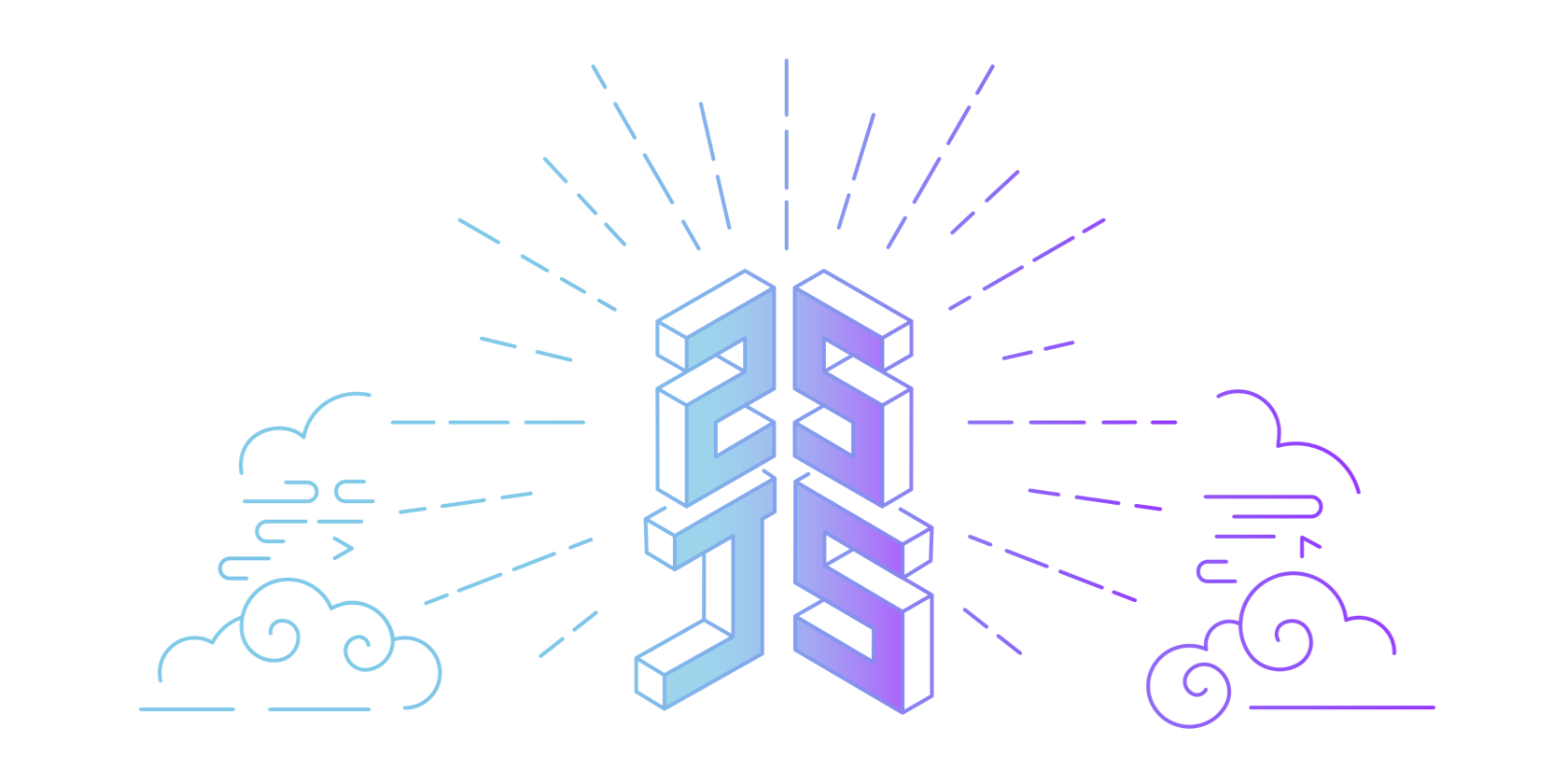 JavaScript turns 25 years old today. While it’s made an impact on my career as a developer, it has also impacted many developers like me and users around the world. To commemorate our favorite language, we’ve collected 25 landmark events that have shaped the path of what the JavaScript ecosystem looks like today.

In 1995, Brendan Eich, a developer at Netscape, known for their Netscape browser, was tasked with building a client-side scripting language that paired well with Java. While it may not be the language that you know and love today, JavaScript was written in 10 days with features we still use today, such as first-class functions.

Despite JavaScript being created 2 years before, there was a need to create open standards for the language if it would be used across multiple browser types. In 1997, Netscape and Microsoft came together under Ecma International to form the first standardization of the JavaScript language, resulting in the first iteration of ECMAScript.

Some will recall using iframe tags in the browser to avoid reloading a user’s page with a new request. In March of 1999, Internet Explorer 5.0 is shipped with XMLHTTP, a browser API that could enable developers to take advantage of background requests.

4) JavaScript gets its own data format

In 2001, JSON was first introduced via json.org. In 2006, an RFC proposing JSON, JavaScript Object Notation, was opened for review with the proposal of more than one type of HTTP call to fulfill a website: one that would fulfill a browser’s needs and the other would provide application state. Thanks to its simplicity, JSON would gain traction as the standard and continues to be used today. (Source)

After other browsers followed Internet Explorer in supporting background requests for updating clients without reloading pages, a researcher penned the term as Asynchronous JavaScript and XML, or AJAX, highlighting the shift in web development and JavaScript to asynchronous code. (Source)

With more complexity being enabled in the browser, there was a need for tooling to keep up. Firebug was created in 2005 as the first Developer Tool to debug in Mozilla’s Firefox browser. It was the first piece of tooling that provided developers the ability to inspect and debug directly from the browser. (Source)

jQuery can be considered the pioneer of what we know today as modern front-end web development, and it has gone to influence many libraries and frameworks today. At its height, being a JavaScript developer and being a jQuery developer were interchangeable. The library extends the JavaScript language to easily create single-page applications with DOM-traversal, event handling, and more.

As websites went from HTML pages to JavaScript applications, it was imperative that the browsers hosting these applications keep up. From 2007 to 2010, many browsers made major releases to keep up with the growing demand from JavaScript compute power. When Chrome was released, the browser’s JavaScript engine, V8, was released as a separate project. V8 was a landmark project with Its “just-in-time” compiler and would be used in future projects as a reliable and fast JavaScript runtime.

In addition to the release of V8, Chrome introduced developers to another innovation: Developer Tools that are native to the browser. At the time, features only included element inspection and looking at resources, but the tool was an upgrade from the current tooling and would influence an entire suite of developer tools for front-end development. (Source)

In an effort to modularize JavaScript code and take code bases from single file scripts to multi-file source code, the CommonJS project was an effort to elevate JavaScript into language for application development. CommonJS modules would influence the Node.js module system.

11) Node.js takes JavaScript to the back-end

JavaScript had gained momentum as a language for the browser for many years before making its way to the back-end. In 2009, an engineer at Joyent, Ryan Dahl, introduced Node.js, an asynchronous event-driven JavaScript runtime at JSConf EU.

Long before types were popularized in JavaScript, there was CoffeeScript, a programming language that compiles to JavaScript and was inspired by Ruby, Python and Haskell. The compiler was originally written in Ruby and didn’t require compatibility from dependencies because it compiled to JavaScript, and it gained traction for exposing the good parts of JavaScript in a simple way.

13) Node.js gets its first package manager

Shortly after Node.js was introduced, npm was created. npm (short for Node package manager) would eventually create the standard in managing dependencies for both front-end and back-end applications making it easier to publish, install, and manage shared source code with a project file, the package.json. npm also provided the npm registry, which would supply hundreds of thousands of applications a database to retrieve Node.js dependencies.

Inspired by Ruby’s Sinatra, Express.js was released in 2010. It was released with the intention of being a minimal, un-opinionated web framework that provided routing, middleware, and other HTTP utilities. According to GitHub, Express remains the most popular framework for back-end JavaScript developers to date.

While back-end JavaScript was gaining traction, front-end MVC frameworks were starting to pop up. Most notably, Backbone.js and AngularJS (later rewritten and released as Angular) were starting to be adopted and loved by JavaScript developers. Backbone’s approach to front-end was well-suited for mirroring an application’s business logic, while Angular took a declarative approach that enables a robust web application in the browser. Both frameworks would go on to influence later front-end libraries and frameworks, such as React, Ember.js, and Vue.js.

In 2011, a forked version of an earlier project called SproutCore, is renamed to Ember.js. Ember introduces JavaScript developers the concept of convention over configuration, in which the developer does not have to think about design decisions that can be standardized across code bases.

2012 was a big year for static typed languages. JavaScript was, until then, a dynamically typed language by design, in that it doesn’t require the developer to declare types when initializing variables or other data structures. Enter TypeScript – an extension of JavaScript that allows developers to write typed JavaScript that is syntactically similar to JavaScript and compiles to JavaScript. Microsoft made the initial release of the project in October of 2012.

18) The world reacts to React

In 2013, a developer at Facebook, Jordan Walke, presents a new JavaScript library that does not follow the then-popular MVC convention of JS frameworks. (Source) React, a component-based library that was simply the V of MVC, would go on to become one of the most popular libraries of today.

Additionally, with the rising popularity of Node.js, there was momentum to repurpose the runtime or other uses. GitHub made use of Node.js as a library with Chromium’s rendering engine and created Electron for desktop applications. Notable desktop applications that use Electron include GitHub Desktop, Slack, and Visual Studio Code.

The 6th edition of ECMAScript was released in June of 2015. This specification was anticipated by many JavaScript developers for its inclusion of popular features such as support for export and import of modules (ES modules), declaring constants, and more. (Source (http://es6-features.org/)) While the previous version of ECMAScript (ES5) had been released 6 years before, much of the standards released had been worked on since ES3, which was released 16 years before. (Source)

21) GraphQL emerges as a REST alternative

In 2015, Facebook released GraphQL as an open source project, a querying language for APIs that simplifies request calls between clients and servers to resolve the differences between server-side data schemas and client-side data needs. (Source) Due to its popularity, the project would eventually be moved to its own GraphQL Foundation.

2015 was notable for back-end JavaScript developers because it marked the merging of io.js back into Node.js. Just a year before, Node was forked as io.js in an effort adapt quicker release cycles. When io.js was merged back in, it had already released v3, so it was natural to release Node v4 after the merge as a fresh start for the combined projects. Hereafter, Node would adapt a release cycle that would keep it up to date with the latest V8 releases.

After years of the JS Foundation and Node.js Foundation operating separately, the two organizations merge and become the OpenJS Foundation with goals to increase collaboration and provide a united home for projects across the JavaScript ecosystem. (Source)

25) Deno makes a splash with the initial release

This year, Node.js creator, Ryan Dahl, made the initial release of Deno, a JavaScript and TypeScript engine that, again, is built on top of V8. The project has generated a lot of interest because of its first-class TypeScript support and, of course, inspiration taken from Node.js.

While these landmarks highlight some exciting moments in JavaScript history, there are countless other honorable mentions and important contributions too. The JavaScript ecosystem would not be where it was without the hard work to of developers around the world today. Every pull request, conference talk, and blog post has inspired the next innovation. For that, we thank all of you for your contributions and look forward to the bright future of JavaScript.