Coding at the Speed of a Pandemic: How Trineo Delivered Apps That Test the Test Kits

The need for speed takes on a new meaning in the face of a pandemic. With millions of lives at stake, everyone in the healthcare ecosystem, from medical facilities to laboratories to equipment manufacturers, races to do their part to help curb the spread. With the coronavirus, the world put widespread diagnostic testing at the […]

The need for speed takes on a new meaning in the face of a pandemic. With millions of lives at stake, everyone in the healthcare ecosystem, from medical facilities to laboratories to equipment manufacturers, races to do their part to help curb the spread.

With the coronavirus, the world put widespread diagnostic testing at the core of its pandemic response playbook. However, testing is only effective if the test results are accurate — a false negative could not only endanger the individual, but also their entire community.

Third-party quality assurance providers play a vital role in testing the tests. They make sure that test equipment and processes adhere to the highest standards. One of the global leaders in this field is the Royal College of Pathologists of Australasia Quality Assurance Programs (RCPAQAP). Since the early days of the coronavirus pandemic, the company has assisted with vetting diagnostic testing in Australia.

To be an effective partner in Australia’s pandemic response, RCPAQAP needed speed on their side. So, their software development agency, Trineo, hit the ground running and deployed rapid point-of-care quality assurance apps to Heroku in record time — just before test kits began to roll out across the country.

The vision: an app platform to QA coronavirus test kits

As Australia ramped up coronavirus testing, diagnostic test kits from different suppliers began flooding into the country’s pathology labs. RCPAQAP took on the challenge to develop a new quality assurance program to ensure that these kits performed as expected and that their rapid deployment did not undermine quality standards.

To be successful, RCPAQAP’s solution needed to be first and foremost simple to use. Like all frontline health professionals, lab technicians were under a great deal of stress, and any test validation tools had to mitigate the risk of user error or decision fatigue. The solution also had to seamlessly scale to serve a potentially massive increase in testing in the weeks or months to come, as the virus showed no signs of slowing down.

In partnership with Trineo, RCPAQAP envisioned two cloud applications that would support both core objectives. A progressive web app for mobile use would allow users to capture and transfer lab testing data and send it to RCPAQAP for quality assurance. An administration portal would allow the company to access and manage test data, as well as share it with others involved in pandemic response, such as healthcare organizations and public health authorities.

Both apps needed to be ready to go before test kits were made available — which meant only a few short weeks for development. The Trineo team had to act fast.

The context: complex system integrations made it harder to build quickly

Trineo’s partnership with RCPAQAP goes back several years. The agency had already built a robust platform to support the company’s ongoing QA programs, featuring a number of deep integrations that enable data sharing with various medical systems and business systems (like Salesforce).

The COVID-19 project, however, presented a different kind of challenge. This time, the focus was on development agility (which would enable maximum speed). The Trineo team could have built on top of the existing platform, however development would have been slower, making it harder to deliver the new apps as quickly as the country needed them.

The team decided to step back and start fresh. Alice Eller, Director of Project Delivery at Trineo, says: “Just focusing on the new apps in isolation gave us the freedom to be more nimble and move faster, while still leveraging all the knowledge we’d gained from working with RCPAQAP over the years.”

The shift: an agile, prototyping-focused methodology

The Trineo team sat down with the project manager at RCPAQAP and gathered some basic requirements for the apps to give them a rough shape of what was needed. In a few hours, one developer spun up an initial prototype, deployed it to Heroku, and shared it with the client who could then provide constructive feedback. Having a quick prototype gave everyone a tangible sense of what the app could be — right from the start. With very low effort and cost, the team could capture valuable learnings and work towards an MVP with confidence.

Because the project’s time frame was so tight, the Trineo team had no time to take a wrong turn at any point. Everything they built had to be the right thing, and the team couldn’t allow themselves to get stuck down a rabbit hole. The prototyping approach was invaluable because it gave them a quick way to validate an idea and then go build it out properly.

Shipping incrementally to stay ahead of the deadline

Over the course of four weeks, the team worked on the new platform piece by piece, deploying what was ready to production on Heroku, and then moving on to the next. The basic functionality was there early on, and if the test kits were released earlier than expected, RCPAQAP could have started their program with the apps as is.

During this time, some of RCPAQAP’s program logistics were falling into place, such as QR codes for each test kit, and those got incorporated into the app as well. Eventually, the full, end-to-end user flow was completed well before the test kit rollout, and there was even a little extra time to add some bells and whistles.

Eller says, “It was a really nice feeling to know that we were ready. We had solid, quality apps in time for our client to help tackle this major crisis that was quickly unfolding.” 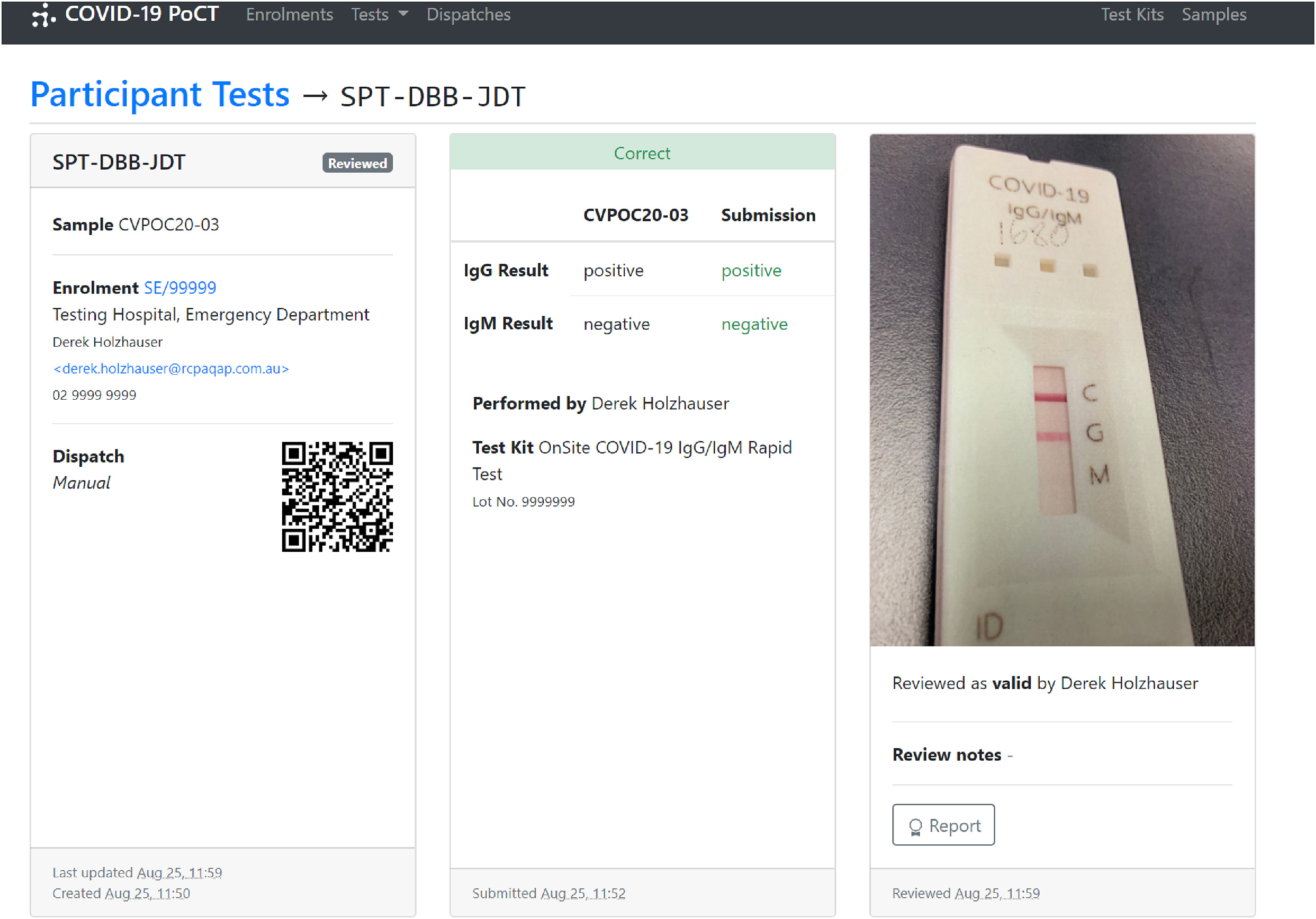 From testing to validation a sample in just a few clicks

To validate a test kit, RCPAQAP uses coronavirus test samples that they know to be either positive or negative. They attach a QR code and unique ID to each sample and ship it out to a testing laboratory. The lab technician then tests the sample using a particular brand of test kit and then scans its QR code on their mobile phone to bring up the RCPAQAP progressive web app. Because the app’s UI is so simple, the technician can quickly enter the test results without fear of mistyping or clicking the wrong button. They also attach a photo of the test kit itself, and submit it with the report. The RCPAQAP receives a notification that the report is available for review, and the team then compares it with the known results.

In one case, the team identified a mismatch. RCPAQAP had sent out positive test samples and the reports were coming back negative. Without the photo capture feature in the app, the lab could have concluded that the technician had misinterpreted the results of their test. But the photo showed that the actual test kit was showing an incorrect result. The lab stopped using the test kits and reported the findings to the manufacturer. This goes to show how important the QA process is for lab tests, particularly during a pandemic when one faulty test kit can impact so many lives.

Trineo Express on Heroku: a new way of working for clients

Prior to the RCPAQAP project, Trineo had been developing a repeatable methodology for quickly prototyping and delivering new apps, and the success of the new test kit apps only energized the team even more. Trineo Express is designed to enable businesses to extract maximum value out of ideas and quickly turn them into real solutions. Says Eller: “At the start of an Express project, we ask ourselves: ‘What is the smallest thing we can put in front of a customer that they will find meaningful?’ And we’ll build on that.”

Heroku is the cornerstone of Trineo Express. As with the RCPAQAP apps, Heroku makes it easy for developers to spin up a prototype and iterate quickly without having to spend time on infrastructure concerns. They can also leverage a wide range of Heroku Add-ons to add functionality that demonstrates their ideas. But most importantly, once the pieces of a project get pushed to production, they can stay on Heroku for the long term. Heroku’s seamless scalability allows clients like RCPAQAP to handle massive spikes in traffic without issues.

EJ Guren, Head of Marketing at Trineo, believes that the Express offering is particularly ideal for businesses who are struggling during the pandemic: “Many businesses are facing budget constraints, a decrease in consumer activity due to waves of lockdowns, and so on. How can they avoid stagnation or the risk of falling too far behind? We help them continue to invest wisely in their business on an incremental basis, so that when the world recovers, they’re way ahead.”

Speed can be exhilarating

For the Trineo team, one of the most surprising outcomes of the RCPAQAP project has been the experience itself. Everyone thrived while working in the Express mindset. Rapid iteration allowed the client to see progress and participate fully every step of the way. Clear direction and fast feedback allowed the team to forge ahead knowing they were on the right track.

“We could see that we were building something worthwhile, for our client and society,” says Eller. “Everyone felt a sense of urgency, but not stress, and we were able to be really productive every day.” One thing is clear: speed and agility have become the new normal at Trineo. The pandemic fast-tracked this new methodology, and the team looks forward to continuing to practice it well after the crisis is over.

Read our Trineo case study for more ways that the agency uses Heroku.

Learn more about this project by reading Trineo’s RCPAQAP case study and their client’s article in the Journal of Practical Laboratory Medicine.