An Iconic Fundraising Tradition Returns with a 21st Century Twist

The Xplenty platform allows organizations to integrate, process, and prepare data for analytics in the cloud. Xplenty is also available as a Heroku Add-on. Abe Dearmer is the company’s COO. Often, innovation sparks innovation in unforeseen ways. In the early 1950’s, television brought the world an entirely new experience that not only changed people’s daily […]

The Xplenty platform allows organizations to integrate, process, and prepare data for analytics in the cloud. Xplenty is also available as a Heroku Add-on. Abe Dearmer is the company’s COO.

Often, innovation sparks innovation in unforeseen ways. In the early 1950’s, television brought the world an entirely new experience that not only changed people’s daily lives, but also created a unique platform for national culture. One of the most beloved and enduring traditions that emerged on this new national stage was the telethon. A combination of “television” and “marathon,” a telethon is a broadcast fundraising event that lasts for several hours or days and features entertainment interspersed with a call for donations.

America’s most iconic, and longest-running, event was the Jerry Lewis MDA Labor Day Telethon run on behalf of the Muscular Dystrophy Association (MDA). In 1952, the comedian began hosting an annual Thanksgiving telethon for the charity’s New York chapter, and in 1966, the event moved to Labor Day weekend and went national. When it was discontinued in 2015 (just one year shy of its 50th anniversary), Jerry Lewis and his telethon crew had raised more than two billion dollars for the MDA. Over the years, the once-novel platform of television became an important catalyst for transforming the lives of people suffering from this heartbreaking disease.

A new definition of “telethon”

The fight against neuromuscular diseases continues, and in 2020, there is still no cure. Fundraising is still a top priority for the MDA, and to develop their next strategy, the organization first looked to its past successes. However, the world has changed dramatically in fifty years. The epicenter of national culture has moved away from broadcast television and onto a plethora of social media platforms. Could the telethon format be adapted to fit this fragmented landscape and engage a new generation of donors?

Thanks to the collective efforts of a number of celebrities and technology providers, the MDA ran an all-new telethon this past October. Hosted by another popular comedian, the MDA Kevin Hart Kids Telethon was a two-hour event that streamed across multiple platforms and included comedy, music, gaming, an afterparty, and more. The event did indeed spark engagement and generosity — it raised a whopping $10.5 million to support the MDA, as well as Kevin Hart’s own charity, Help From the Hart.

During a Jerry Lewis telethon, an army of volunteers would man the event’s phone lines as people called in to pledge their donations. This time, an all-digital approach needed to pull together a more complex framework, as well as help scale beyond the impressive reach of the old format.

A live, multi-stream, interactive event requires the careful orchestration of many different technologies and services. During the weeks leading up to the telethon, the event team worked with fundraising platforms DonorDrive and Tiltify to develop and launch a number of online campaigns, as well as collect donations. To track the funds that flowed in from various sources, the MDA needed a data dashboard that would give them a unified view of activity and allow them to analyze and leverage the data. Their requirements included the ability to: 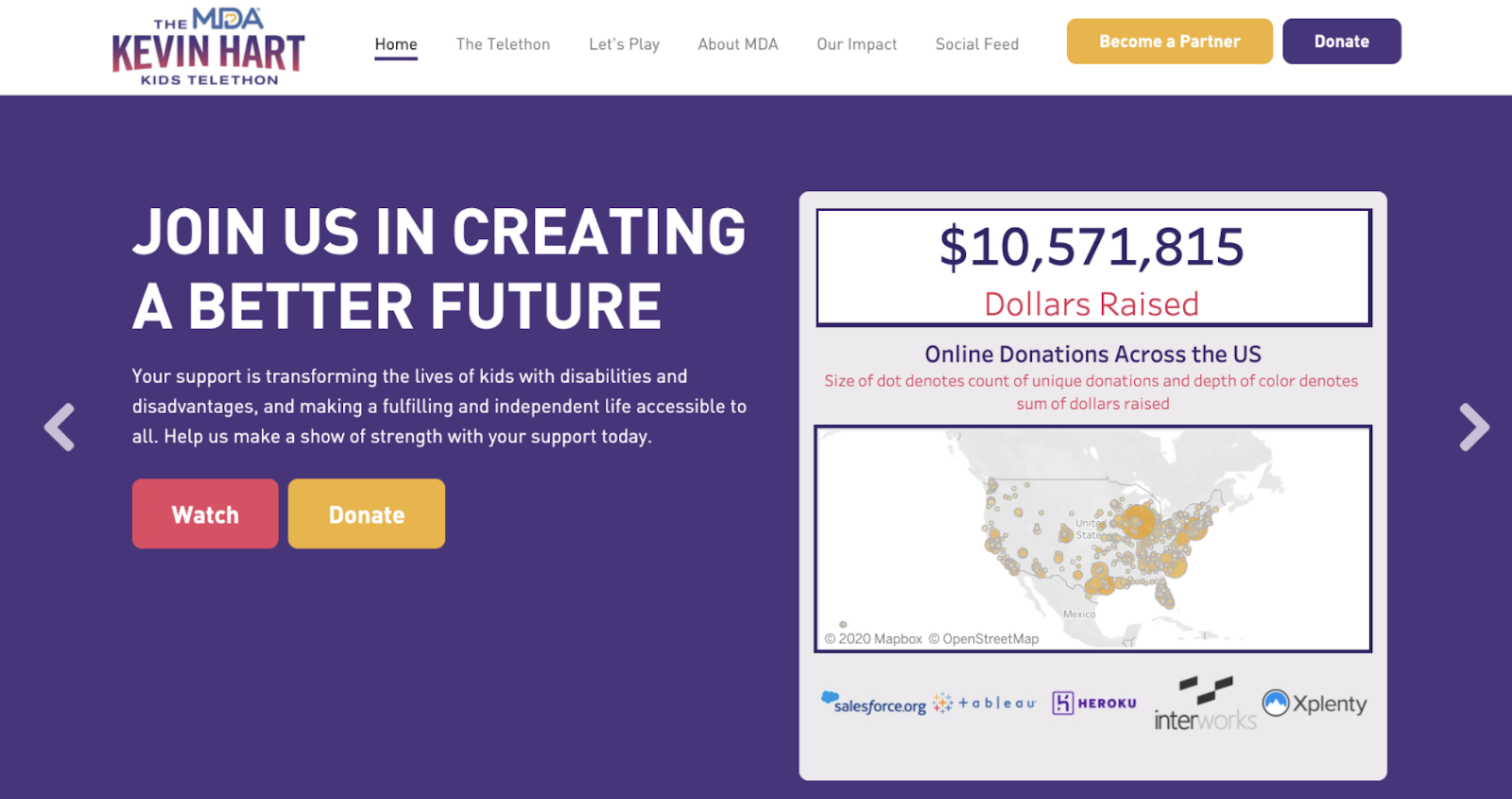 Building the telethon’s data system was truly a collaborative effort between the MDA, Salesforce, and Xplenty engineering teams. They deployed an app on Heroku that aggregated data in Heroku Postgres to create a single source of truth. A key part of this process was handled by Xplenty’s data integration service. Xplenty provided a data pipeline tool to extract data from DonorDrive and Tiltify into Postgres, as well as an on-platform transformation layer to prepare the data for display. The team then used Xplenty to automatically run the processes on a set schedule that updated the Heroku Postgres instance in near real-time.

With the data system set up, the team could then build ways to use it. They created an internal reporting and analytics dashboard to track and access data as needed. These insights helped the organization understand which promotional campaigns were effective and where they may want to focus their efforts during future fundraising campaigns.

The telethon website also displayed real-time donation numbers during the event to help keep everyone energized and engaged with MDA’s goals. MDA engineers used Tableau to present data in a visually attractive way that was also easy for anyone to digest. Prospective donors would see exactly where their gift would fall on the leaderboards, potentially inspiring them to donate more. 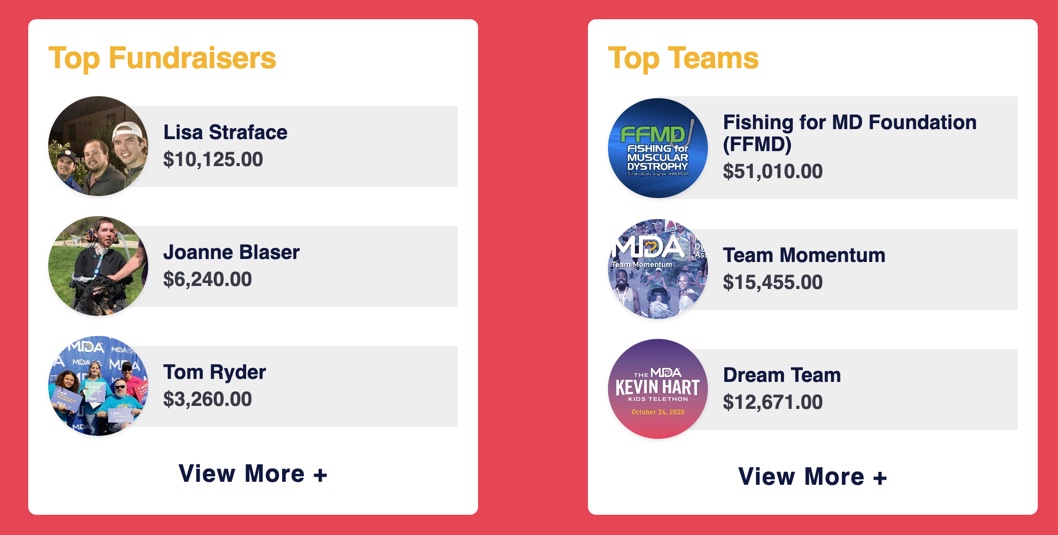 The Jerry Lewis telethon was made possible by a wide network of local TV stations — dubbed “the Love Network” by the MDA — which, at its peak, included 213 stations across the country. Today, the organization is working with a new set of partners, but the spirit of teamwork for a great cause remains the same. A close collaboration enabled the MDA to get a first social media telethon under their belt, and they can now create a repeatable format that breathes new life into this traditional event for years to come.

The MDA’s partners can also scale their learnings to achieve even greater impact. Thanks to the MDA experience, Xplenty can now offer DonorDrive and Tiltify pipeline templates to other charities interested in creating a single source of truth for their fundraising efforts.