How ‘Latinx’ Is Leading The Resistance Against Gendered Languages

Growing up, KR Vargas struggled with his genderqueer identity. And once he had come to terms with that identity, he had difficulty finding the right words to express it, and to help others understand it. He came face to face with the limitations of language, and the ways it can shape, or erase, a person’s […] 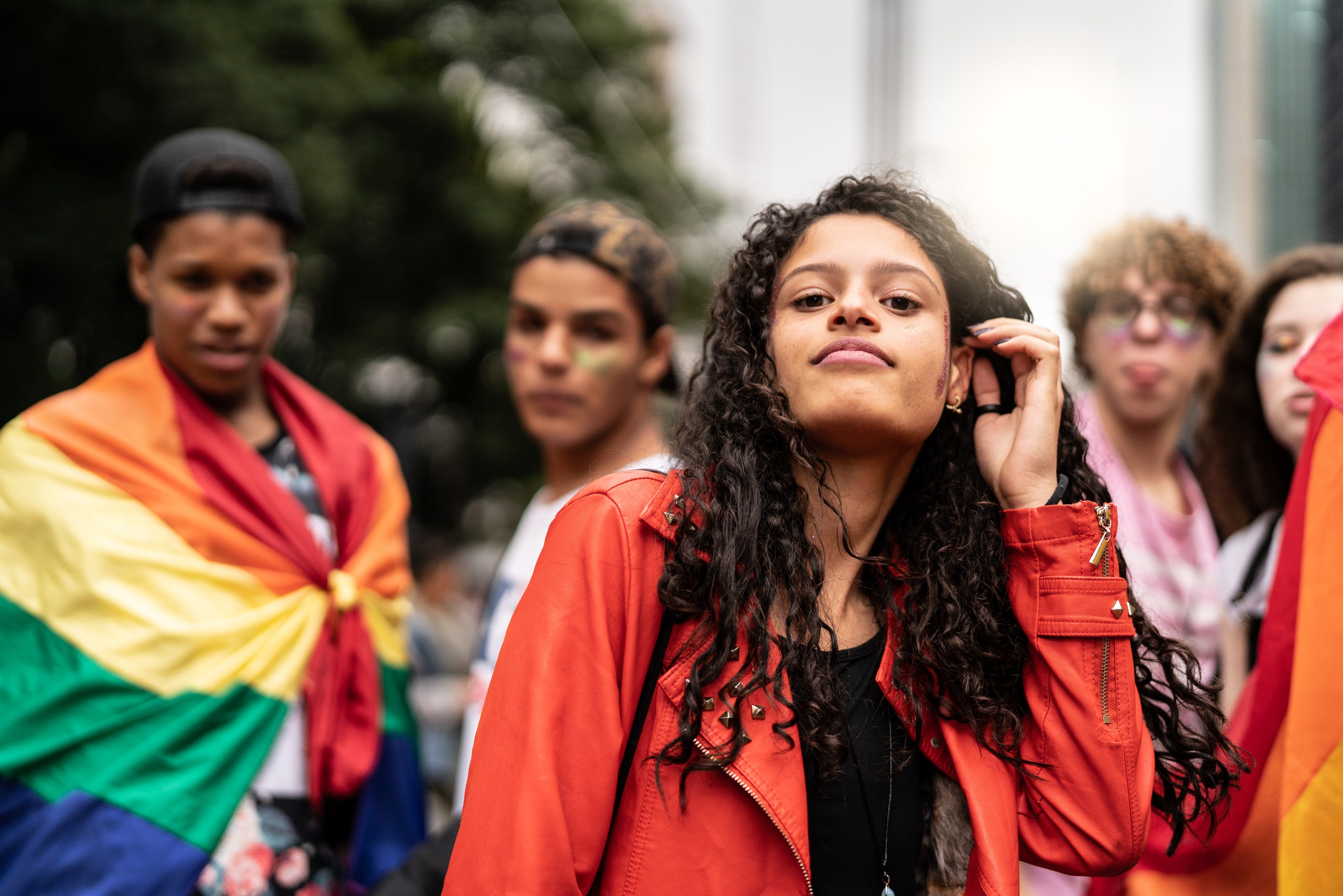 Growing up, KR Vargas struggled with his genderqueer identity. And once he had come to terms with that identity, he had difficulty finding the right words to express it, and to help others understand it. He came face to face with the limitations of language, and the ways it can shape, or erase, a person’s entire being.

“It felt like it was never going to be possible for me to be seen for who I am,” said 25-year-old Vargas, who uses he/his pronouns, thinking back to a time when gender was defined in dichotomous terms: you were a man or a woman, a he or a she, and in Vargas’ case, a Latino or a Latina.

Vargas remembers feeling a lack of options and hopeless about the prospect of change. He said the general consensus about gender was “this is what you are and if it doesn’t feel right, then something is wrong with you.”

Enter the term “Latinx” — a gender-neutral or non-binary alternative when referring to an individual or group of people of Latin American descent. The word first appeared online around 2004 but has recently surged in use, particularly among members of the LGBTQ community.

Jennifer Prewitt-Freilino, an associate professor of psychology at the Rhode Island School of Design, said the time is ripe for words like Latinx to come to the forefront.

“You look at the landscape of gender and sexuality and race, and all of these things are becoming much more fluid,” Prewitt-Freilino said.

In today’s social climate, when movements like Black Lives Matter, marches for women’s rights, and discussions about gender-neutral bathrooms have become part of the national conversation, terms like Latinx can more easily break into the mainstream. And they’re already changing the way we talk about the relationship between gender and language.

Many of the world’s major languages, including Spanish, French and German, are grammatically gendered — embedded throughout with masculine and feminine versions of words, which can have a major impact on gender equality.

“The masculine terms are often the default and they’re considered neutral, which I think says something really deep about patriarchy and masculinity as the primary source of power in the culture,” Resto said.

There is evidence to support this viewpoint. Prewitt-Freilino co-authored “The Gendering of Language,” a study that reveals a correlation between grammatically gendered languages (like Spanish) and gender inequality in the countries where those languages are widely spoken.

But if gender and language are so deeply intertwined, what can be done to pull them apart?

Language is constantly adapting and evolving, as it has for hundreds of thousands of years. That’s good news for Latinx advocates, but how does the decoupling of gender and language begin?

According to Birte Dreier, a project manager on Babbel’s didactics team, there are two ways these changes can occur. One approach is from the bottom up, meaning it starts on the individual level or in small groups and then spreads.

Prewitt-Freilino agrees. She said in many Latin American countries, the evolution of gendered language comes from specific communities, “especially queer communities — people who are tapped into what’s going on in the gender world.”

The second approach is top-down, in which changes are implemented directly at a governmental level. Some European countries have enacted, or have begun to enact, language reforms on a national scale. For example, in 2012 Sweden introduced “hen,” a gender-neutral pronoun. In addition, the European Union has funded studies looking into specific topics related to the intersection of gender and language, such as how using gendered language in job listings affects the number of women who apply.

The Backlash Against Latinx

With any sociocultural movement or effort to take progressive action comes an equal and opposite reaction.

“The resistance fascinates me,” remarked Avi Roque, who lives in Chicago and self-identifies as a trans, genderqueer, non-binary, gender non-conforming human, and also as Latinx. Roque said they’re particularly surprised by how quickly new ideas are dismissed without a second thought.

Vargas has seen her fair share of vitriolic rebukes, giving her the opportunity to hone her responses.

“I like to ask questions in a way that just sounds like I’m curious and not attacking them,” Vargas said. “I really like it when people get through their own thoughts or their own beliefs, and follow them through all the way to the end, and realize themselves that there are some flaws in their thinking or a lack of compassion in their thinking.”

But criticism can also be more subtle and nuanced than a hateful attack, especially when it comes from someone with a similar social mindset. Jasmine, a Latin American woman who asked to be identified by only her first name, takes issue with where Latinx originated.

“I kept seeing [Latinx] used more and more by bloggers and people not of Latin origin, and that’s when it started to bother me,” Jasmine said. “It felt like it was non-Spanish speakers trying to take control of my language and my culture.”

Swarthmore College’s newspaper The Phoenix took this argument a step further in an editorial published in 2015. The authors made a case against the term Latinx, writing that it “was used almost exclusively in the U.S.”

“This is a blatant form of linguistic imperialism — the forcing of U.S. ideals upon a language in a way that does not grammatically or orally correspond with it,” the editorial stated.

It’s not clear who first coined the term Latinx, or even whether it originated within or outside of the Spanish-speaking community. But for those who identify with the term, it doesn’t really matter. What matters is having a word that gives them a sense of belonging.

“Little-by-little I’ve been getting the language and the words to define myself,” Roque said. “For 25 years of my life, I didn’t know that there were ways other than man and woman, boy and girl, to exist.”

Resto echoed that sentiment and expressed the importance of language for her.

“A lot of people will be like ‘Oh, it’s just semantics, it’s just a word,’ but words are powerful,” Resto said. “It’s awesome to feel like you’re a part of something bigger, even with one word. It feels really powerful.”

The Future Of Latinx

What’s next for the Latinx movement? In the short term, the goal is to continue to spread the term’s use and acceptance in society. (A 2019 Pew study found that only 23 percent of Latin Americans in the United States had heard of the term, and only 3 percent used it.) Longer term, perhaps more changes are in store for the Spanish language.

Prewitt-Freilino said the way forward is through the advent of terms like Latinx, rather than adapting existing terms, because new words allow for a fresh start.

“What makes Latinx different … is that it’s new,” Prewitt-Freilino said. “I think that creating new language is actually the best way to really subvert the system and to get people to reflect on it.”

“Speakers of languages which obligatorily express grammatical gender must come up with linguistic innovations so that they can communicate in a way that reflects more modern social attitudes toward gender; the term Latinx is a perfect example of this type of creativity,” McCurdy said.

Other gender-neutral alternatives in Spanish have also begun to emerge, especially in online communities. One of these alternatives is replacing the “o” or “a” in gendered nouns with the @ symbol. It’s a clever way to be gender inclusive when texting or tweeting, but how do you pronounce it? Another alternative that seems to be gaining more ground is the use of “e” instead. For example, Latines might address their amiges (“friends”) to include any and all genders. The “e” is considered as a solid option because it fits nicely into existing Spanish language, and its pronunciation is clearer than “@” or “x.”

Trying to reform an entire language, particularly one steeped in gendered grammar, is no easy task. Some might even say it’s impossible. But not Vargas, who is thrilled to finally have a term he can embrace as a crucial part of his identity.

“It’s just really realizing that what you thought was impossible is possible,” he reflected on first learning about Latinx. “So that was just beautiful.”

This article was originally published in 2017. It has been updated to add additional context to the modern discussion around this topic.

The post How ‘Latinx’ Is Leading The Resistance Against Gendered Languages appeared first on Babbel.