The Language Of Flamenco

Whether you’re a fan of flamenco or not, flamenco terms comprise an entire language that will surprise you with its expressivity. In addition, you’ll discover in this article how the music genre that’s formed such a crucial part of Spanish culture has also slipped into everyday Spanish conversations. If you want to spice up your […] 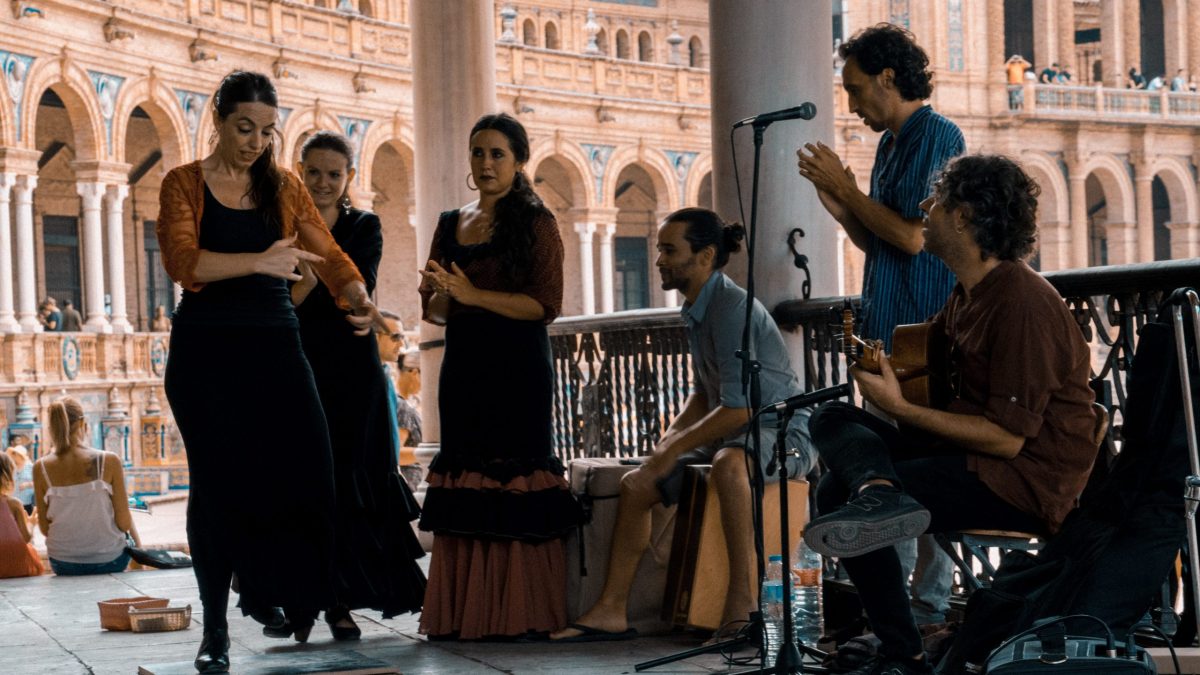 Whether you’re a fan of flamenco or not, flamenco terms comprise an entire language that will surprise you with its expressivity. In addition, you’ll discover in this article how the music genre that’s formed such a crucial part of Spanish culture has also slipped into everyday Spanish conversations.

If you want to spice up your Spanish vocabulary, keep reading!

Flamenco, a symbol of identity and artistic expression from Andalusia, was declared an Intangible Cultural Heritage by UNESCO in 2010, which emphasized its universal character and recognized its international reach. This art form, comprised of pure feelings and precise techniques, unites music, singing, dancing and poetry, and is for many a philosophy of life.

With its foundation in folklore, flamenco is rooted in popular music and soaked in the cultures that gave it an indelible mark from that time: Islam, Judaism and of course, Romani.

The origins of the word “flamenco” itself are unknown. Although there are many theories on this, the most widespread is from Blas Infante in his book Origins of Flamenco, maintaining that the term derives from the Arabic expression Felah-Mengus, which means “wandering farmer.”

Today it’s an art with a dedicated following, enriched by many diverse styles and a wide variety of palos (the name for each traditional style): bulería, saeta, fandango, rumba, petenera, soleá, alegría, tangos, sevillanas, seguiriyas, and many more.

What’s clear is that flamenco terms have left a very expressive footprint on Spanish language as a whole — so much so that they’re now part of the idiosyncrasies of Spanish many people take for granted.

¿Nos arrancamos ya? — Don’t worry, we’re not jump-starting anything or causing pollution by cranking a motor. Arrancarse in flamenco is to start a song or a dance. Ready to go? Prepare those palmas!

palmas — palmas (the palms of the hand) are another instrument in this genre, with their clapping sound as fundamental as the guitar’s strumming. Their main task is to carry the sound and accompany the singing. There are different kinds of palmas: sordas (soft), redoblás (beating) and naturales (natural).

tablao — the stage used in flamenco

duende — if a duende (spirit) appears when you’re watching flamenco, don’t be scared. The word duende is used to refer to the talent of the artist. What’s certain is that the duende has something mysterious to it that goes beyond an artist’s technically impeccable execution. It’s an intense emotion that the artist both experiences and transmits to the audience, and it can’t be explained exactly how or where it comes from.

pellizco — if you catch pellizco, we promise it won’t hurt. Pellizco (literally “pinch”) is the name given to the intense emotion that the audience experiences watching a certain flamenco song or dance.

armar jaleo — getting involved by clapping your palmas or shouting to the tocaor or bailaor during a dance is an inherent part of flamenco. The expressions used are the famous ole and arsa.

ole (olé) — an interjection that has transcended flamenco and is used colloquially to express celebration or admiration. Recently there has been some uncertainty about the origin of this word, but one of the most widely accepted theories is that it comes from a traditional Muslim exclamation that sounds like Wa-llâh (“by God”). However, the phrase was modified intentionally by the Muslims to wallé to not sound like a religious invocation, as it was just used as a way to expression admiration.

jondo — jondo is a variation of hondo (deep, intense) in the Andalusian dialect, which has a characteristic aspirated H. It’s the most genuine and profound form of Andalusian singing.

rematar — to conclude in flamenco. The remate can be used to end a series of movements or emphasize a specific lyric, if it’s used to continue the music or movement.

cabales — when the singer changes tonality repeatedly. This is the origin of the expression no está en sus cabales (isn’t in their cabales), used to refer to someone who seems to have lost their judgment.

farruco — a type of flamenco originating in the north of Spain. The word farruco refers to someone who’s arrogant and disrespectful. Based on that, there’s a theory that non-Andalusian cantaores faced criticism from the flamenco purists.

peteneras — a style of flamenco with melancholy lyrics interpreted in a slow, sentimental way. The colloquial expression irse por peteneras (leave by peteneras) means to change topics in a conversation, sometimes to talk about something sad.

milonga — characterized by its melancholy lyrics. It’s one of the styles known as “round-trip” singing because it arrived in Spain from Argentina at the end of the 19th century and fused with flamenco. In everyday language, the expression no me cuentas milongas (don’t tell me milongas) is used to tell someone that you don’t believe their story because it seems false (basically, “don’t tell me your sob stories”).

desplante — refers to a strong step the bailaor takes at the end of a melody. The word also alludes to a forceful gesture that someone makes when encountering an unpleasant situation.

This article was originally published on the Spanish edition of Babbel Magazine.

The post The Language Of Flamenco appeared first on Babbel.